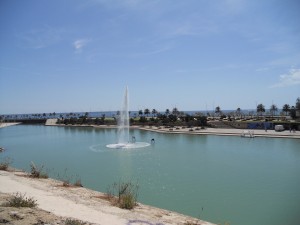 Palma De Mallorca weather is generally good all year round. Just like any other Mediterranean island, Palma De Mallorca has its high seasons where temperatures reach way up into the late 20’s – 30°C (80 – 90F) and it also has its low seasons when the temperatures drops down to a daily average of between 10-15°C (50-60F). However, the moderate climate throughout these lower months still means that it is pleasant to the visit the island all year round.

The hottest months ‘The High Season’ usually start from June to the end of September and into October. The Cooler months generally start around November, December time through until the end of February. March and April can be mixed but usually tend to be very nice, especially mid April onwards. May then start to really enjoy the warmer weather and then leads into June nicely when the high temperatures really begin to kick in.

The moderate temperature in Palma De Mallorca very rarely drops below 5°C during the winter months but it can drop below this temperature on certain days.

Palma De Mallorca does experience rain through the cooler months but they are normally light shower that do not last long.

Obviously, the high season months such as July and August attract many of the holiday makers who come to the island in search of warm weather. This is when the hotels, beaches, bars and restaurants are busiest and it is generally more expensive to visit Palma De Mallorca during tis time.

In the months that are classed as ‘Out Of Season’ you can generally find some great deals on flights and accommodation. As the temperature begins to drop, so does
the amount of tourists, which means getting round the island and seeing all the wonderful sights is so much easier. The cooler temperatures in these months, also makes it much more bearable to set out and explore the island without the searing heat.

The really warm weather normally starts in June and last all the way through until September. This is when the average daily temperature is around 28-30°C.

January: The average daily temperature for January is around 15°C and can reach 18°C with an average of 9-10 hours sunlight. The months of January can see rain but it is generally just light showers.

February: The temperature in February is very similar to that in January with may be a slight increase in temperature.

April: April is a lovely time to visit Palm De Mallorca as it is when the temperature really begins to pick up but is not unbearable. Yes, there are days when it may not be as warm as the others but the average daily temperature in April is between 18-21°C. The nights are around 7-10°C

July. The month of July is one of the hottest months of the year and the average daily temperatures in Palma De Mallorca are around 30°C, with many days reach up to 34°C. The daily low is usually between 14-20°C and sometimes higher which once again, make the evenings pleasant for walking and sitting out. The average daylight in July is between 14-15 hours.

August: August is the hottest month of the year with temperatures reaching up 34°C. The days can become very hot and intense with the heat, especially if you are walking around the city or inland, where there is not so much breeze. The daily low in August is around 15-21°C and can be even higher some days, once again, this temperature is lovely for strolling at night or sitting out enjoying a drink. The average daylight in August is between 13-14½  hours.

November: the temperature in Palma De Mallorca during November begins to drop a little. However, the month of November still sees temperatures of between 17-21°C, which provides the perfect temperature for exploring the island. The daily lows are between 7-11°C and can be higher and sometimes a little less. The average daylight in November is between 9-10 hours.

December: December is one of the cooler months in Palma De Mallorca and is when the ‘Winter’ months really begin. Although the temperature is still a nice moderate 16°C, it can drop to around 12°C. The daily low also drops to an average cooler temperature of 6°C. The average daylight in December is around 9 ½ hours.

The above figures are only a guide to Palma De Mallorca weather and obviously these temperatures can fluctuate from year to year.